I was encouraged to enter this race by Nick Burns, who suggested that it would be a great fitness test 4 weeks out from a marathon.  This seemed like a good idea in November, but I was having second thoughts on the 20th January race day after 3 weeks of a respiratory infection (or man-flu if you ask my wife).   This wasn’t helped by Nick sending me a link to Emma Brear’s apocalyptic race report from the previous year (https://www.steelcitystriders.co.uk/2018/four-villages-half-marathon-results/).

Despite the dry forecast, the drizzle turned heavier and became persistent rain as we drove past Manchester and into the village of Helsby.  Although we arrived one hour before the 10:30 start, the suggested car parks were all full, so we dumped the car in the first place we could find and jogged the 2 miles to the start instead of waiting in the long damp queue for the courtesy bus.

Things got a lot better on arrival – the race HQ was friendly, well organised and efficient, with plenty of toilets and great baggage storage (learn a lesson Manchester marathon!).  By 10:30 the rain had indeed stopped, and we set off running along the A56 for the first mile, then turned on to quiet country roads where we remained for the rest of the race.  The route undulates for the first few miles, with quite a kick around the 10-mile mark; there’s then a very welcome two-mile descent to the finish.  The goody-bag contained a nice little medal, a Mars Bar (haven’t they got small?!!) a gel and a boot bag.

This is a great little race, very well organised and marshalled by Helsby Running Club.  It’s about 65 miles across the Pennines from West Sheffield, but the new Manchester Airport Link Road meant we got there in 90 minutes. I would recommend it for anyone fancying a friendly, low-key January half.

The men’s race was won by Mohammed Abu-Rezeq in 1:06:38 and the women’s race by Kirsty Longley in 1:18:08.  First Strider was Andy Norton in a brilliant 1:19:13, making up for his disappointment of the year before.  My man-flu stayed in remission and I was happy to finish in a steady 1:36:50. Nick smashed it in his second fastest half-marathon time of 1:32:00, despite a heavy few weeks of marathon training.  Five striders toe-ed the start line in total: 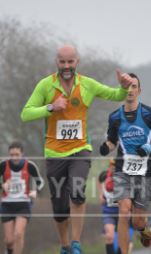