The Glen Lyon Ultra is a 50km trail ultra in Glen Lyon and Glen Lochay in the middle of nowhere, Perthshire Scotland.

It forms part of a series of ultras run by BAM racing, including the Glen Ogle 33, the Glen Glen ultra (71 miles – Fort William to Inverness) and the Glenmore 24-hour.

The event was very well organised, no frills, you could wild-camp at the starting location, and the scenery was spectacular. Despite being We’d been staying just to the south at Loch Earn – 20 minutes drive in to Killin on Loch Tay, then an hour to do the 23 miles on some epic tiny roads into Glen Lyon. There was snow on the ground when we arrived, but it melted quickly. Despite being in the middle of nowhere, there was a coffee stand Land Rover, and registration was straightforward. We were handed our race Tshirts and timing chips then.

The route was easy to follow – 15 miles around Loch Lyon, starting with a nasty hill from close to the start, then up, up, up, along, down, down into Glen Lochay. Half way down the hill we veered right for an 8 mile loop, descending at the end to return and alllllllll the way up the hill and back to the start – 31.5 miles. Having not been there before, I enjoyed the fact that it was clear whereabouts on the course you were – first quarter – north side of loch, second quarter south side, OVER the hill, third “quarter” along the hillside, fourth “quarter” back along the foot of the valley, back OVER, start/finish/checkpoint was where you’d left it.

The pre-race briefing had warned of knee-deep river crossings and advised against waterproof shoes or gaiters, and there were four or five wide rivers as we circled the loch. The surface was good tracks and the river crossings were fords, so not horrendously deep, but I did go up to my knees. Some people were trying to jump rocks, but I just ploughed through – there didn’t seem any point in trying to stay dry. My socks and shoes drained nicely and I changed into dry socks at the midway point.

Climbing out of the first glen we began to see the leaders on their way back. It was fun to cheer them and offer some encouragement, and marvel at their speed – they were about 10 miles ahead of me! Over the top and down to the checkpoint where I refilled my water bladder and turned west again for the next loop. The route left the tarmac we’d been on and was back to rough Land Rover track, with gates to keep the sheep (and tiny lambs) in the correct places. I found the steep descent to the valley floor tricky with 20miles on my legs so took it carefully. Not having seen anyone for ages, I thought it was a good place to nip around a corner and answer a call of nature. We were too high for trees to hide behind. Of course, as I finished another lady promptly came around the bend in the path.  Typical! At least it was another woman, and we had a laugh about ultras and a little while later she appeared from behind a wall (I should have waited for better shelter!) having got ahead of me again.

We’d been amused by the race briefing including items like “you’ll have to climb over the fence after the Highland cows” and “watch out for new-born lambs on the tracks” but the next challenge was a bull (definitely an intact bull) beside the path close to the turn back uphill. I was REALLY glad that he seemed more interested in the cows and calves in the next field, and walked very carefully past, with no eye contact, but trying to peek out of the corner of my eye to make sure he didn’t get interested in me!

Never found the fence by the Highland cows, but happy to turn back up the hill which meant I was finish-bound, although it was one loooonnnnggg trudge back up. I was able to catch a couple of people, then on the final descent could see someone just ahead stopping every so often. I was concerned, but he told me that he was just “hurling” and it happened in every race. We ran/walked down to the finish, then staggered up the final hill (another one, really???) and crossed the line together. He’d done “more ultras than he could count” and beat me to dibbing his timing chip by 9 seconds. Lovely guy, looked in the second half of MV60 – if I can countenance running this distance at that age I’ll be VERY happy!

I’d hoped to finish by about 5pm, and asked my husband to come back then, so coming in at 5:07pm was a pretty good estimate. It was definitely tougher than my first ultra at John Muir which had been very flat, but I felt good at the finish. The goody-bag was high quality, a lovely wee medal as well as a Tunnocks Caramel Wafer, small bottle of Irn-Bru and a race-labelled bottle of my favourite (Thistly Cross) cider. No plastic tat! While I didn’t win any official prizes, one marshal told me that I had won her “smile-iest runner” award, and the post-race massage physio awarded me her “tightest calves” award. Later on the race FB page it was lovely to hear about the winner of the “lanterne rouge” who came in an hour after me, awarded a similar trophy to the podium finishers, as well as bits of merchandise etc, and thanked for “bringing the race home”. As she said “I’d have been sprayed at the London marathon.”

It really felt like a runners event – no frills, just drive an hour into the middle of nowhere (camp if you want to) and run 31.5 miles. The atmosphere was fantastic, so welcoming and fun, and everyone was applauded. I’d definitely recommend it if anyone fancies the journey north into the Highlands and dealing with the local wildlife! 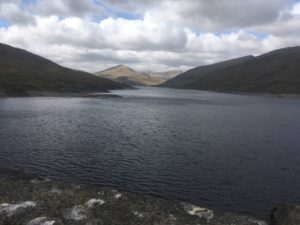 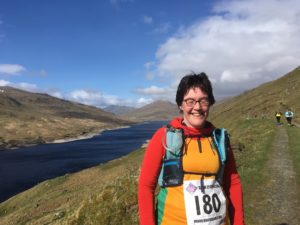 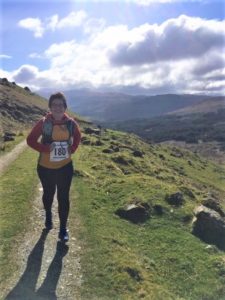