This was meant to have been the Dronfield 10k, but handily two old friends decided to get married in Lewes the day before and spared me the pain of that long uphill drag. I hadn’t raced for over two months though because of a knee injury, and I was getting itchy. Luckily, Sussex has a brilliant website for local races (http://www.sussexraces.co.uk/) and I spotted this one, about 20 miles from where I was staying and the morning after the wedding. After a hangover breakfast of poached eggs, toast and lots of coffee I was raring to go.

Hartfield is a picturesque village on the edge of Ashdown Forest in the Weald. It was also home to A.A. Milne. Race HQ was in the local cricket pavilion, where ironically, given that it’s literally at Pooh Corner, there was only one gents’ cubicle. Organisation was friendly, and there were also a 5.6k, a kids’ fun run and a walk, so the event felt very inclusive. Lots of families with dogs, a local butcher doing a barbecue, homemade cakes for a donation to the playground fund…

As we gathered for the start, I noticed that everyone bar me was wearing trail shoes. Before I could worry about that though, someone in a Lingfield Running Club vest tapped me on the shoulder and said: “You’re a long way from home. My nephew races for you lot.” Truly, the Striders have eyes everywhere.

The race is a long anticlockwise loop on trail, grass and fields. There are lots of friendly marshals and two water stations. The ground was firm, but uneven enough to be quite tiring. It starts off with a short descent on a narrow path, over a bridge and into a steady climb through woodland. The next couple of kilometres are fairly flat, along paths and across fields, before the one real obstacle, a short, sharp grassy ascent which was the only place I could have done with the extra grip of trail shoes. Once that was crested, at about the three-mile mark, it was across a field and over a stile. Unfortunately, the stile was slippy and I whacked my shin on it, which was eye-watering but not enough to cause problems. I was flagging a bit, having set out quite fast, so I was glad the next bit was a long downhill, losing all the height we’d gained in one joyful half-mile descent of the roughest bit of terrain of the whole course. The rest of the race was almost completely flat, and for the last 2km completely straight as we slogged along an old railway line back to the bridge at the start. Then it was just a couple of hundred yards up to the cricket ground and a dash for glory with the very generous and vocal support of the locals.

This was a really nice event. It lifted my mood, cleared my hangover and handed me a medal at the end. It’s not massively difficult, or super fast, but it is picturesque, good-natured and a great way to spend a morning if you’re down that way. 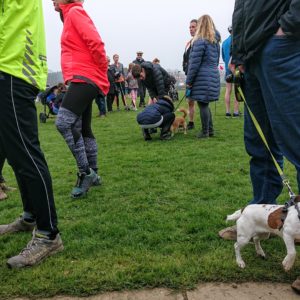