So, almost exactly a year ago, I decided to run a marathon. I finished the Sheffield Half Marathon surprisingly strongly and thought – I could happily run another three miles, so if I can do 16, a bit more training would get me to 20. If I can run 20, I can run a marathon. The decision was made.

In terms of which one, I entered London but didn’t give it much hope (ultimately unsuccessful). I flirted with the idea of New York, but being an Autumn marathon meant training through the heat of the summer, which doesn’t suit me at all. Amsterdam was the same, but my lad Evan returned from a school trip to Paris in May and loved every minute. We decided to go on a family break (I had never been and Emma only once many years ago) and when I saw that the marathon was in the Easter school hols, it started to add up. The Paris marathon is one of the biggest in the world, gets fantastic reviews, and is easy to enter, as opposed to London. Flights and accommodation booked, race entered, all that was needed was 20 weeks training! This is where Matt Rimmer steps in who put together 5- or 6-week blocks of increasing weekend LSR distance, together with Monday Striders and Thursday solo run.

Matt’s training got me to the start line – first major achievement!

So to the race itself. We travelled to Paris on the Wednesday to enjoy the city and get used to the place, keeping sightseeing to a minimum. The weather was perfect for running, being cool and bright and fairly still. I got to the 4:30+ starting pen on the Champs Elysees about 9:30 ready for a scheduled 10:10 set off. The excitement and anticipation was so tangible in the pen – so many doing their first marathon, and so many nations around me. We finally got going about 10:30 with a steady jog down the Champs Elysees away from the Arc de Triomphe.

The route itself is mostly stunning & flat and the support incredible, particularly when you consider that we were the last of the days 50,000+ runners. I met Emma and Evan around mile 4 which gave me a real boost. I was feeling that typical ‘early in the run’ tiredness where I thought there was no way I could run for an hour, let alone five! Then it was the case of just chugging the miles by. I felt good and strong and confident. I stopped running for a short walk at each water/fruit stop which were about 40 mins apart at my pace. This gave me a good rhythm of running with some respite to look forward to, and allowed me to take on gels and electrolytes. The idea of running continuously for 5 plus hours seemed impossible.

The route leaves central Paris and into parkland of Bois de Vincennes between miles 7 and 12. Certainly quieter in terms of spectators but a nice break from the built up areas. I passed the halfway stage still feeling good in around 2:40 which isn’t too much slower than my usual HM times. A long stretch along the Seine is really nice. I recall now, as we passed Notre Dame, overhearing another runner remark that it was incredible that something like that was built 800 years ago and it has survived so long. The irony! We ran through a few road tunnels which all stunk of piss! and one of which was the scene of Diana’s crash.

The Eifel Tower was now in sight and was near where I planned to see Emma and Evan again. I met them about mile 19 and told them how strong I was feeling. Emma was shocked at how good I was looking. Think she thought I’d be a broken mess by that stage! Just 7 miles to go! I ran well until about mile 23 where I really started to flag. We were in another bland parkland and the road seemed endless. It looked like a war zone on the side of the road with broken bodies everywhere!  The mental arithmetic of working out the remaining distance, in either miles or KMs was somewhat of a challenge! I managed to keep chugging along, getting slower, until we reached the final kilometre, where we returned to the splendour of Paris and Avenue Foch. I managed a much-increased pace over the final few hundred meters and crossed the line in 5:35:24

After the first couple of miles, I don’t think I ever doubted I’d finish. It would be slightly churlish to admit that I was a little disappointed in the time. I’d originally set out on this journey with a possible 4:xx bearing in mind HM times. During the race, I felt 5:20 was possible. Strangely enough, if I’d walked as much as some people around me, I probably would have been quicker.

That said, I absolutely loved it! The day was right up there with the best days of my life. So much that could have gone wrong stayed away. The weather was perfect thankfully. The temperatures next weekend are looking brutal for 5 hours of running!

Thanks to all my running buddies, and to Matt & Kim for their wise words and professional advice. In particular though, huge thanks to Emma and Evan for sharing the journey with me and giving me a reason to do it all!!

I have run a marathon!!! That will always stay with me! 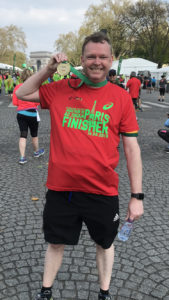