Caught in either the tail-end of Storm Freya, or the leading edge of Storm Gareth, the north-west was a cold, wet, and windswept place to be on the morning of the GPW Recruitment St. Helens 10K.  Nevertheless, I had a 10K PB monkey on my back I wanted to shift, having been trying and failing to match my 10K time of 2009 ever since, so now was not the time to worry about a bit of inclement weather.

The race starts and ends at the compact  but welcoming St. Helens Rugby League stadium, heads out through the town centre, round a couple of laps of Victoria Park, and then back. North Road, a straight road up and over a hill features heavily in the race branding – “I Survived North Road” – so I was prepared for a pretty tough race considering the conditions and the course.

Jackets, tights, bobble hats and buffs featured heavily on the starting line, with not very many runners in my section of the field opting for the flimsy running vest and shorts attire that I had opted for.  I figured if it’s cold and wet enough, a few extra inches of sleeve aren’t going to make very much difference. Nevertheless I felt a little under-dressed. And cold. Mainly cold.

The race started under sheets of rain blown across the course with each gust of wind, and it was a relief to get going.  However, very narrow sections of the course, a lot of congestion, and a proliferation of bollards on the course where pavements met roads – it was like a Wednesday night session from HLC with shouts of “BOLLARD!” every now and again – meant that a good rhythm was hard to find.

After a frustrating first mile the field thinned and the route widened, it was time to face North Road … and I suppose it was a hill, I guess? It went up for a while, and then down for a while, but apart from that, it wasn’t anything to particularly worry about.  That’ll be the benefit of training in Sheffield.

A couple of wet laps laps round a park, and an unexpected cheering section of nuns from a local convent followed, and then it was back over the North Road hill.  A little tougher the second time round, but only a little. And then, over the last couple of miles I became unable to look at my watch.  I knew I was going well, and that I was in about the right sort of shape to beat my previous best time (51:41), but I didn’t want confirmation – I think I was a little scared of seeing bad news.  It had been a fairly tough course, and the start had been slow – perhaps I thought I’d done better than I really had?

And then, coming round the outside of the rugby ground before entering for the finish I heard the stadium announcer from inside telling someone that they were about to beat 48 minutes. “Holy s**t! What!?” I didn’t know how far I was from the finish, but knew it was pretty close.  I gave it everything I could from then, passed a number of runners on the finishing straight, and with lungs burning and pain etched on my face, made it in 48:44.  A three-minute PB!

The race was won by Matthew Crehan of St. Helens Sutton AC in a time of 31:21.  First woman was Kelly Hamilton of St. Helens Striders in 40:18. 1,602 runners completed the race. 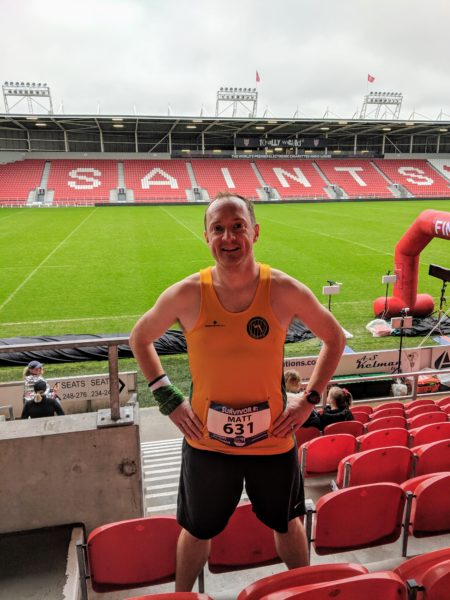