There’s an old story about Seb Coe and Christmas Day training that has it that he was just sitting down to Christmas lunch, having done a 10 mile session in the morning, when he realises the reason he feels bad is the fear that arch-rival Steve Ovett is out training still. ‘I bet that bastard is doing another session,’ he told his father.

I was on holiday in Suffolk last week, and unable to find any local fell racing or trail events, but having recently read the LDS standings (look here for detail) and finding myself in second place (!) I was inspired to find something, even if it meant a bit of a drive. I could call it a tourist route, perhaps. I did not want to fall behind as others raced in the Peaks, etc.

A lengthy interweb search brought up the target race, and it fitted in nicely after a day of visiting Aldeburgh (home to Ed Sheeran’s ‘Castle on the Hill’) and Southwold (home to Adnam’s brewery tour and store).

Gus, a veteran runner from Bungay Black Dog Running Club who used to live in Sheffield and ran with Steel City Striders back in 1982, told me it really was a ‘summer sizzler’ last year. This time the rain was corrugating the windows as we hid indoors before leaving for the start line.

Still, I simply told myself that this was the South Yorkshire 5 Mile Road Race Series replacement and therefore the weather was only to be expected. I was right to anticipate very little hill compared to any Sheffield-based race, but also to hear some moans as we ground our way up a massive 158 feet of ascent in total.

It was wet, and my new shoes got well and truly baptised. The start was well away from the Community Centre and finish, so the trip down, following the Starter with her large Club-coloured brolly (merch idea, Nick?), was a good warm-up.

We swept into Suffolk as we crossed the River Waveney, and then back into Norfolk a little while later. There was one interesting bank of 300 yards that touched on 11% uphill, but, as I was running this race, back home a group of Striders were tackling the Springvale Spirals so I was neither complaining or walking (as some did).

Excellent views and local scenery on the route – thatched cottages, cows and calves, orchards, a bridge connecting the counties, high-banked country lanes that kept off the worst of the wind, traditional village signs / emblem boards – kept me entertained enough to deal with the pain of chasing seven minute mile pace. That, and noticing how the local Clubs have animal names: Black Dog (Bungay), Jaguars (Coltishall), Gazelles (Norfolk), and Goat (Lonely).

Anyway, I didn’t win anything but was given a cup of water and a medal, and bought a decent cuppa and a spicy bean burger. I did get those five more race miles.

First three male and female, and first in each age category, got a nice little ‘plate’.

Winner was Robert Chenery (Ipswich Jaffa) in 28:06 (ranked 236 nationally at this distance this year).

First female was Nicola Lambert-John (Coltishall Jaguars) in 33:28 (ranked 44 nationally in her age group at the 5 mile distance this year).

Stuart Jones (Steel City Striders) finished 31st out of 271 finishers in 35:33 (a rank of 208 nationally for age group and this distance).

And here are the results in full: http://www.chiptiminguk.co.uk/wortwell-sizzler 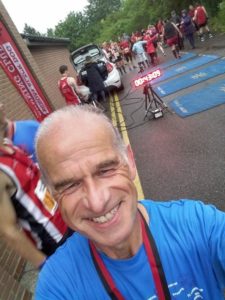