At 2:01:14, the club’s M60 fifteen mile record is a soft one. So, with an eye on eternal fame, an on-line entry was made for this event whilst the distance would also suit marathon preparations. It was then noticed that this was a trail race described as testing; oh well!

Race HQ is at Hadleigh Cycle Park overlooking the Thames Estuary near Southend, a legacy of the 2012 London Olympics where the mountain bike events were held. A display board announcing how it was once the site of a brick works was bad news for this could only mean that the soils would be clay based.

The first four miles might be described as testing but an opportunity to recoup time follows as the next nine miles are along the sea wall onto Canvey Island before returning to the park for one last hurrah. The final climb to the finish line, packed with spectators, was reminiscent of Roundhay’s Hill 60. For them interest in the race itself had long since passed by the time the slower competitors attempted the ascent and they were now just having a good time, offering advice and baying for mud if not actual blood. 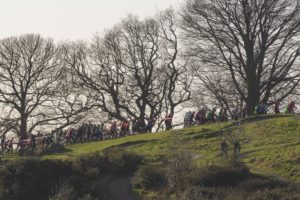 In a parody of the final scene from Bergman’s The Seventh Seal, competitors toil up one of the early inclines. (Photo Mike Jeffery)

For your £25 there was a promo t-shirt and medal if you like that sort of thing whilst, mercifully, showers were available plus tea and cake for a charitable donation. With hoards of marshals the organisers even put on some fine, if initially frosty, weather. 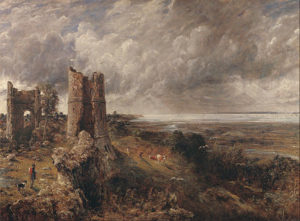 For those not focussed on their feet, the course takes in fine views of Hadleigh Castle. Built by Hubert de Burgh, one of King John’s top men, it was refurbished in the 14th century by Edward III as a defence against French raiders during the 100 years war. In the Georgian period, although by then much of the building had slid into the sea, it was used by Customs men on the look out for smugglers whilst more famously it was the subject of this work by Constable.