Well, I had been warned, hills were going to be a recurring feature in this race (and let’s face it me and hills, we don’t get on). I signed up nonetheless, for a race that billed itself as the “the North’s most scenic half”.

I arrived and parked-up in a field in a car full of Striders and headed to the start village. The paper race numbers hadn’t been delivered so we waited. To speed up things when the race numbers did finally arrive, we were offered the chance to find out our race number (paper race numbers weren’t sent out in the post), as a special service race numbers could be written on our hands (to aid memory).  The numbers did arrive, and the number collection stalls were hastily converted from the likes of “Surnames A-G” (or whatever it was) to “race numbers 0- 200” etc.  Due to the delay in the distribution of race numbers, the start was delayed by 15 minutes.  The bag drop(s) were also an issue. The closest bag drop to the issuing of the race numbers was reserved for “Ladies” (as I was told), the male bag drop was down the road (some way towards the start line). It should be stated that other males were later able to store bags there (amongst those for their female co-runners), but to be fair it wasn’t a major issue.

Prior to the delayed start time we were marshalled down the street to take our places on the start line.  The start came as a bit of a surprise (a large pop, rather than a 3-2-1 style countdown), but we were all moving at pace as we crossed the start line (all hail chip-timing).

Now we were racing. We went through the streets of Eyam and residents were out in support, and after a small loop (round local fields), we were sent out down the road with a left turn which provided a taste of things to come.

Yes, hills. As sure as eggs is eggs, if a race finishes near its start point, if you go up (by any distance) that will be matched by corresponding downhill section (yin and yang and all that).

The challenge comes from the undulation of the course. Yes, there are downhill sections where you can really let-loose and “up the pace”, but the steep uphill parts can really sap any momentum you have built up (which are fairly regular and some of them were particularly steep).  After about 11 miles the worst of the hills are behind you, and the downwards decent into Eyam and the finish line begins (with the odd short uphill section, as befits the course). The crowds at the finish line provided that last bit of encouragement.

The weather was good (and the sun came out) and the promised rain never arrived (so all good there).

This was never going to be a P.B. course and I finished 10 minutes off.

In general, the course is challenging, but rewarding. Local support is good, and as for the scenery, all I can say is that it is a shame to be going through it at pace, without the opportunity to fully enjoy it (even more so for the speedier runners), but such is the nature of running I suppose.  Definitely worth a go, but do some hill training first (I suggest).

Oh, and a Strider was the first home (Rob Byers). Congratulations to him. 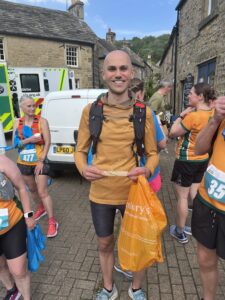