I like race titles that are self-explanatory, like Grindleford Fell Race. It starts in Grindleford and it’s on some fells.   Self-explanatory title aside, I’d never actually raced it before. Mainly because I’m mostly a road runner, but also because the race had a little covid hiatus. I did however do a recce last year, so I knew what was in store for me. 4.9 miles of undulating fun!

I gave Al Cook (the fast, tall, bearded one ((not Seth)) a lift over from Sheffield. I pre-warned him that, a) I would be very slow and, b) my car was covered in a load of bird shit, but he still accepted my offer, so off we went.  The car chat mostly involved comparing how badly we’d both prepared… remembering at the last minute we’d entered, not sorting a lift, and a less than ideal week of prep — something about injuries and alcohol and similar excuses.

Once we had arrived in my bird shit covered car (never parking under a massive tree again), we meandered down to the start area on the grass pavilion, where a big white tent was erected. There you could collect your race number and an electronic wrist tag (the ones that look like you’re being tracked by the Home Office/the police/a prison).  The race numbers were divided up by name into four boxes. There was some dubious splitting up of the alphabet, with the first box being only A-C, so Al Cook was onto a winner either way and was straight in to get his number with no queue, while I waited behind 57 other people for my number (slight exaggeration). Phil Howson, of Phil Howson fame, was standing behind me and had also spotted the interesting box division. Clearly divided up by an English teacher not a maths one, as G was thankfully in the D-J box. The number giver lady told me I was easy to find. I would hope so, surely that’s the point of this exercise!  Number collected, I then gravitated towards people I recognised — which I find makes you look A LOT less weird than talking to strangers in these kinds of situations. Most were pleasantly surprised/mildly shocked to see me, given I’ve been very inactive on Strava of late, shall we say.

Despite starting at 7.30pm it was still the kind of hot where it felt like the middle of the day. I’d forgotten how nice it was to stand chatting before a race in the warmth, without having to worry about what point you take your hoodie/coat/thermals/hat/gloves/snowsuit off.  I had agreed beforehand to run with a non-strider friend, so I briefly broke from the Strider’s huddle to talk to her and agree a plan, which basically involved starting at the back and staying there.   After a team photo and a token warm up we were then ushered to the start line a bit like the horses at the Grand National are, before a briefing, that, due to a broken megaphone and being at the back, I heard none of. I’m sure it was lovely and informative nonetheless.  Being more of a road runner I am naive how these things are organised, so I may have asked at one point ‘What do we get at the end?’, before remembering I only paid 6 quid to enter, so yeah, that would be nothing then.

Then off we went. Galloping like the fine, well trained species we are.

After a lap of the pavilion, we were straight out onto the road, before turning into a wooded section, and what can only be described as hell. Hell being 1000ft of elevation in just over a mile! Apparently some people ran up this bit, but quite frankly, I couldn’t, so I just ran a token bit. I remembered this hill (thanks to the recce), but I hadn’t quite remembered how long it went on for. I also distinctly remember some deer being at the top of the hill last time, but alas, no wildlife spots this time.  The route was very well lined with super friendly and encouraging marshalls, who would simultaneously congratulate you on your efforts thus far, point you in the right direction, and if positioned near the top of a hill tell you, ‘It’s not that much further’. We all know these people lie to make you feel better, and I can say, it worked.  When it flattened out a bit I remembered I was meant to be running this thing not walking it, so picked up my legs again and set off into a nice downhill section.

The next few miles were undulating, where I mostly moaned to my mate about the hills and how hot it was, before we popped out at Longshaw Estate.   I was jealous of the people out for a nice evening stroll in the Peaks, who’d made a sensible life choice not to run as a hobby. Sadly I sold my soul to running in 2016 so I carried on.  After what felt like forever, but was thankfully mostly downhill, we came to the road crossing at Padley Gorge. There I was greeted by a super friendly fellow Strider, Kevin.

Next was the technical downhill bit through Padley Gorge. I tried to take James Norton’s previous advice he gave me for fell running, ‘Don’t think, just do’. But when you’re a woman approaching middle age who really doesn’t want to break her leg, that’s easier said than done.  I’d been out on the course so long by this point I needed a wee stop, but thankfully we’d thinned out massively by now that this was possible without a huge audience.  Then it was onto the last section. Over the railway line and onto a long grassy field that seemed to go on forever, before the final big river crossing. Here we were greeted by a cheering audience as we slowly waded through like African Elephants in the midday heat.  The final stretch to the finish line was back on the grass pavilion we started on, where you could conveniently buy a pint and a burger to reward your efforts (non alcoholic alternatives were available).

Once I finished I realised just how long Al had been waiting for me. Nearly 30 mins. Sorry Al! So I forgoed a burger and chips and just got a quick drink during the prize giving, before heading back home in the shit mobile. (Well done to fellow Striders Caroline, Paul and Louis on their category prizes).

Overall it was a thoroughly enjoyable race with great views and mixed terrain.  It is well organised and marshalled, so is definitely a good one for anyone who is new to fell running/has a terrible sense of direction.

I will be back, but next year hopefully there will be less shit involved, both on my car and in my running ability. 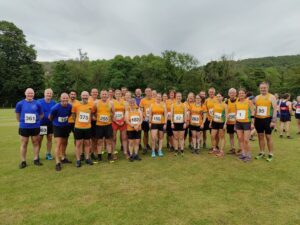