As their website says, the ‘Kimmy Kanter’ has been held by the Kimberworth Striders Running Club every year since 1985. Not quite as old as the Steel City Striders then….just saying!

The 3.8 mile trail race (Race 3 in the Striders Trail Championship) is two laps through the woodlands and fields surrounding Millmoor Juniors FC training ground. The course is undulating but does not have any really serious climbs.

In terms of facilities the race location had plenty of parking, and with registration held at the Millmoor Juniors FC training ground, there was access to toilets and changing rooms. There were plenty of Striders in attendance along with lots of runners from a range of local clubs.

As we arrived early (hoping to avoid traffic which we did successfully) we were able to do a one lap reccy of the course. We found it very well marked with spray paint arrows, and highlights on pretty much every tree root that could cause a trip hazard! 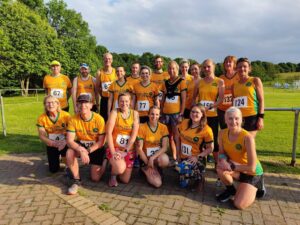 Then after the traditional Striders team photo, we headed down to the start and without being able to hear what the officials were saying, we were off.

Unfortunately, I started way too far back and found the narrow tracks through fields of high grass and woodlands made for difficult, and slightly frustrating, overtaking manoeuvres. I adopted the approach of just shouting “Coming past on your right!”, which gained the joking response of “Bloody Striders” on one occasion to which I replied “I know, we are a right pain in the a*** aren’t we!”. I did manage to push forward, passed quite a few runners, and started to speed up on the second lap, even managing to pull off a sprint finish at the end.

Overall it was a very enjoyable race, the support of fellow Striders and the other club members was brilliant and the race was very well organised and marshalled.

After the race we all headed down to the Drawbridge pub in Kimberworth to attend the prize giving and to enjoy a buffet of roast dinner and chip butties. Unfortunately, because as we all know runners eat a lot, the food ran out so a few of us went hungry.

Highlights of the evening were celebrating fellow striders winning a number of prizes, watching one woman eat a whole plate of stuffing and seeing a man dip his bread in the ketchup, then gravy before popping the whole slice into his mouth. It was an education and I will definitely be back next year to start closer to the front of the pack both at the race and the buffet!